This recipe requires at least five hours prior to serving. I was able to get it on the table for dinner, but some nights we eat later than others. It is a spin on a dish that typically requires eggs. Utilizing the amazing benefits of flaxseed, this is an all round healthy and delicious meal.


1. In a small saucepan, combine the quinoa with 1 cup of water and bring to a boil. Cover and cook over low heat until the water has been absorbed, about 15 minutes. Lightly fluff the quinoa with a fork, cover, and set aside.

2. Meanwhile, in a large skillet, heat olive oil and sauté the onion until soft.  Add the spinach and cook until most of the liquid has evaporated, about 5 minutes. Season with salt and pepper. Transfer the spinach to a strainer and let cool slightly; press out any remaining liquid and finely chop.

4. Stir in egg substitute and spinach into the quinoa mixture and spread in an ungreased 7-by-11-inch pan; it will be about 2 inches thick. Let cool at room temperature, then cover loosely with plastic wrap and refrigerate for at least 4 hours or overnight.

5. Preheat the oven to 250°. Cut the chilled semolina mixture into 12 squares. Put the panko in a shallow dish and season with 1 teaspoon of salt. In another shallow dish, whisk egg substitute with 1/2 teaspoon of salt and 1 tablespoon of water. Dip the cakes into the mixture and turn to coat, letting the excess drip off. Coat the cakes in the panko and shake off excess crumbs.

6. In a large skillet, heat olive oil. Add half of the cakes and cook over moderately high heat until golden on both sides and on the edges, about 6 minutes; adjust the heat as necessary to prevent the cakes from burning. Drain the cakes on a paper towel–lined plate, then transfer to a baking sheet and keep warm in the oven. Wipe out the skillet and cook the remaining cakes in the remaining olive oil. Serve hot.

* To replace one egg: 1 tablespoon ground flaxseeds / 3 tablespoons water (or other liquid)

There really is nothing better then making your own pizza (correctly). I make pizza two different ways. The one I usually make is a cast iron pizza, the second is a traditional oven baked pizza. There's no need for ANY cheese to enjoy a delicious pizza.

Most of the ingredients were from our garden, which gave this an awesome taste. I highly encourage you to always use fresh, local, organic produce to get the most nutrient rich, and tasty whole foods available.

For the first time, I actually used a rolling pin to stretch out the dough. I had a rectangular 9"14" pan I wanted to cook this on, so the traditional pizza stretching wasn't necessary.  Set the oven to 350 - 375 degrees, once preheated, put in the pizza. After about ten minutes, take the pizza off the pan and set directly on the rack for another 5-7 minutes.

Email ThisBlogThis!Share to TwitterShare to FacebookShare to Pinterest
Labels: pizza


Raw dinner took a turn when using our new dehydrator. This recipe does require dehydrating. We had another couple over for dinner, one of which is vegetarian. This is ridiculously easy to make, and ridiculously delicious!

• Place all the ingredients in a high-speed blender. Blend until smooth, adding only as much water as needed to create a thick, smooth kreme.

Millet is something popular amongst countries such as Africa and India. It is a small grain which has been cultivated in East Asia for more than 10,000 years. This food is totally new to me, and I really had no idea what to do with it. Its nutritional value is high in energy, protein, fiber, magnesium, and contains B6 vitamins as well as other important things.

This recipe is a spin on spanish rice. It is good as a side, or a healthy, tasty snack. I found myself nibbling on this (hot and cold) whenever I wanted something to snack on. 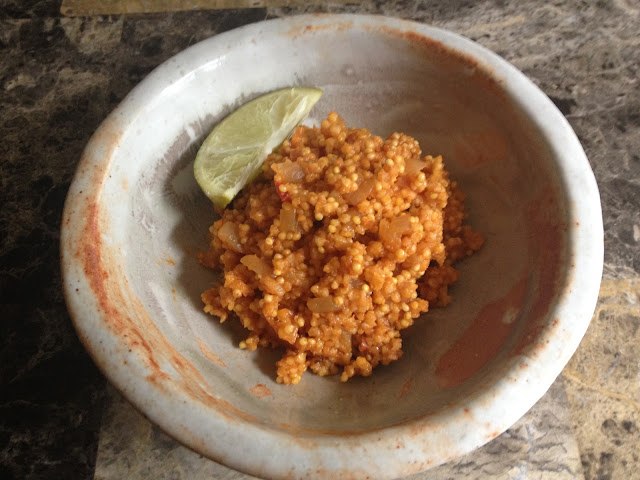 Heat oil and sauté onions until transparent. Add jalapeño and garlic until soft. Stir in millet until golden brown. Pour in vegetable broth and add tomato paste, salt, cumin, and tomatoes. Bring to a boil, then lower temperature an simmer 25-30 minutes.