These came out good, but I overcooked them and they could have used a sauce of some kind. Perhaps a different type of canned tomato, more tomato sauce, or something similar. The flavor of the filling was really good. Three of these seem to be plenty for one person. 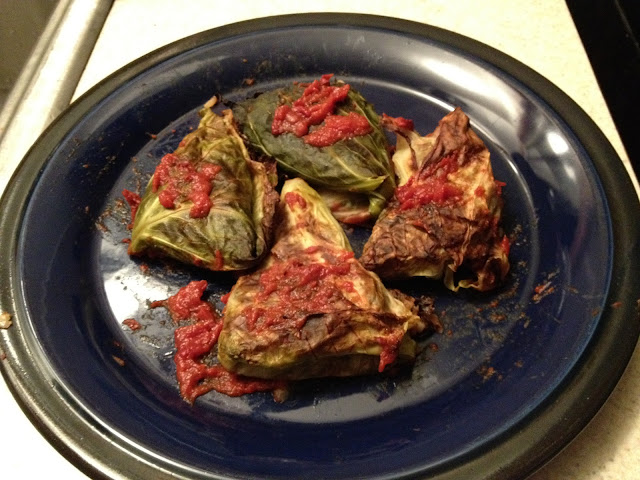 As the cabbage boils in water, the leaves will begin to come off easily. Take them out and let drain. I cut most of the stem out of the leaf, making a 'v', which helps fold the roll.

Add tomato sauce to the bottom of a 9"x14" baking pan. Add the cabbage rolls. Cook at 375 degrees for around 45 minutes.


After going to the Saturday market and scoring some great local honey (I know ... not vegan) and organic carrots, I decided to try making Seitan for the first time. Not by scratch however, I had already purchased Westoy's Seitan Strips from Whole Foods when I saw them on sale. After searching the net for vegan recipes, I've basically memorized how to make Seitan and do plan on it after I use up what I've bought.

We also purchased 'daiya' mozzarella style cheese as well as cheddar style cheese. So, for lunch I needed to use up a green pepper I had in the fridge, and I was craving fajitas from Mi Pueblos the night before. 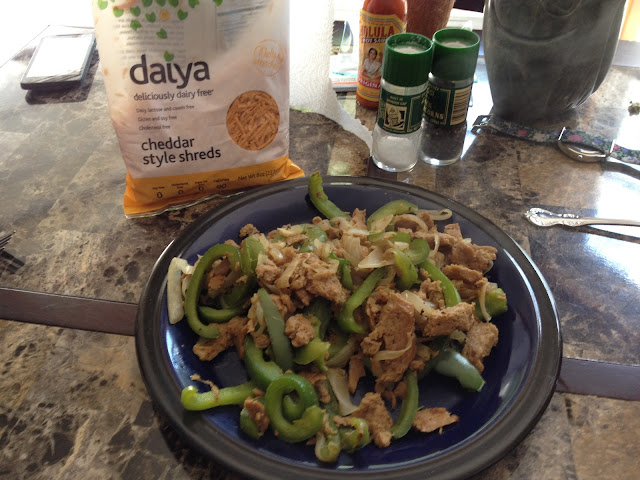 Sautee onions and pepper in olive oil until onion is translucent and the peppers are very tender. Add seitan and cook for about ten minutes, stirring occasionally. Serve with whatever you like eating fajitas with.

I enjoyed it with the daiya chedder style cheese and hot sauce. I'm looking into alternatives for a sauce base that would be somewhat comparable to sour cream. I think I'll try to make whatever they put in those tacos last night!
Posted by Daniel at 10:52 PM


Last night we ate at 'Mi Pueblo's' for their organic menu. The 'Tacos de Paz' on kale leaves were really great! We like going there on Monday's for Mariachi night. The band is seriously wonderful. I'm very fortunate to still be able to go there for good food, and its vegan!

In search of something delicious, I came across a recipe from the Millennium Restaurant in San Francisco, CA. It originally calls for Jerusalem Artichokes, but I couldn't find them anywhere, so I used a common 'globe' artichoke instead. This recipe takes a lot of time, but I would have made my grandma proud! 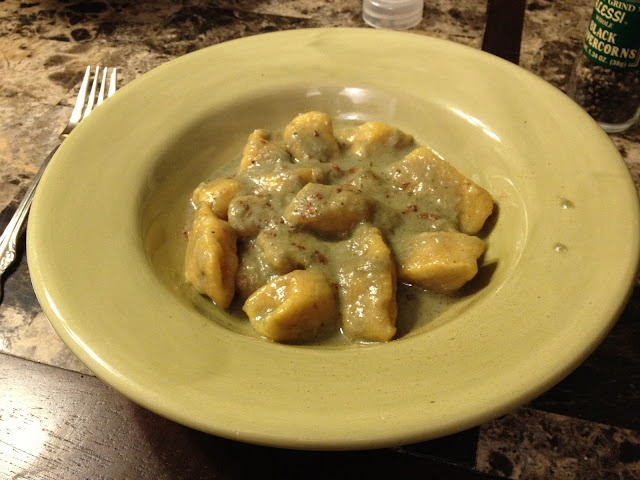 Ingredients for the Gnocchi

Remove skin from potatoes. Its ideal to pass the potatoes and pumpkin through a potato ricer, but I have no idea what that is, nor do we own one, so I used my food processor (after mashing by hand).

Mix in flour until a soft dough is formed. This is really messy and takes a bit of time. Flour is your friend with this step.

Make 1-inch-thick ropes. Cut each rope into 1/2-inch pieces, pinching the sides and place them on a floured pan.

Put in freezer for 1 hour

Sweat the leek in a saucepan over medium heat until soft.

Add the artichoke and cover with stock.

Add yeast and simmer covered until the vegetables are soft.

Puree the sauce until smooth (I used the food processor again). Add salt and pepper.

Bring 3 quarts of water to a boil.

Cook gnocchi 5-6 minutes until they float to and remain at the surface for 2 minutes.

Once all the gnocchi has been removed and drizzled with oil, toss in puree.

Grate nutmeg over top.
Posted by Daniel at 10:14 AM

Since we decided to become vegetarian (not cold turkey ... no pun intended), there has been a lot of research taking place on my part. I have a lot of cooking experience, but very little that is vegetarian, let alone, vegan. It has been quite a frustrating battle in all honesty.

I managed to discover one resource which makes things fun and engaging. After looking on YouTube for Vegan recipes, The Vegan Zombie came up as a result. Last night, I successfully cooked my first meal from this entertaining, and greatly educational, new vegan cooking resource.

Thank you Vegan Zombie for being awesome (and Vegan).
Posted by Daniel at 11:18 AM